While the bestseller of all time is known, it's tough to go beyond that 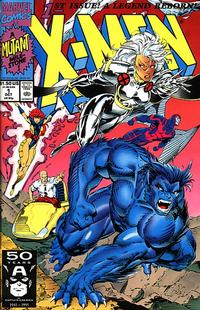 During the heat of the comics boom of the early 1990s, Marvel published the bestselling comic book of all time: X-Men Vol. 2, #1, with sales of 8,186,500 copies; we have more about that comic book and its sales here. There were also a number of other multimillion sellers, including X-Force #1 and Adventures of Superman #500.

Despite that fact, Comichron has not yet attempted a definitive list of the best-selling comics of all time. It's true that in some cases the numbers of the 1990s blockbusters aren't fully known, but that isn't the reason. The reason lies in the early 1950s, in the period between (depending on how you define them) the Golden and Silver Ages of comics.

It's known that in that period Walt Disney Comics & Stories and several other Disney titles were selling well over a million copies per issue; the same is certainly true as well of Superman and several other adventure series. While none of those issues are suspected to have come anywhere close to X-Men #1's total decades later, many would likely rival some of the other early 1990s bestsellers. Any list of comics selling more than a million copies would be littered with issues from that time period — and while I've gotten some information from my visits to the Alliance for Audited Media, which maintains the old Audit Bureau of Circulation data on microfilm, not all of it is broken down by individual titles or issues.

Some of those issues are solvable, so there may be an attempt at a listing here one day — but for the moment, it's best to regard any attempts at such a list as suspect, so long as they leave out that critical era.

We do maintain a list of the best-selling comics of the 21st Century, as well as listings for the bestsellers for individual years after 1991. In both cases these are based on information provided by the Direct Market distributors, Diamond Comic Distributors and Capital City Distribution, and as such are reporting on a specific portion (though often the lion's share) of the marketplace. So, for example, the million copies sold by Pokémon: The Electric Tail of Pikachu #1 in North America in 1999 are not reflected, as those comics were sold not to comics shops, but in bags in places like department stores, much like most of the copies of another million-seller, 1977's Star Wars #1, were.