March 1985 saw the release of what could well have been the biggest unit seller of the year: Secret Wars II #1, launching the sequel to 1984's blockbuster Marvel Super-Heroes Secret Warsminiseries. The first seven issues of the nine-issue miniseries topped Capital's monthly charts, with only Marvel's launch of X-Factor later in the year keeping every issue from dominating. Secret Wars II #1 had more than twice the sales of Uncanny X-Men #195. Capital had preorders of 85,000 copies of the launch issue. 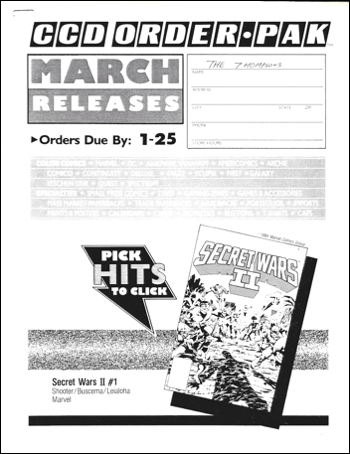 Capital City's orders tended to range anywhere between a fifth and a twelfth of Marvel's overall sales in 1985, depending on how much newsstand and subscription attention a comic book got; we can see that for Amazing Spider-Man #266, Capital's orders of 24,300 copies were 19% of Marvel's Direct Market orders for the issue, and 8% of its sales overall. Meanwhile, on a comic book with few subscribers and where newsstand sales were nil, like the direct-only Marvel Fanfare #21, its 13,750 ordered copies were closer to about 20% of its overall sales.

DC's discount through Capital was not as competitive as Marvel's in this era, giving the latter publisher a 2:1 lead in units overall — but it managed some breakthrough releases, including the continuation of its seminal crossover event in Crisis on Infinite Earths #4, which placed third in units and likely second in dollars with 44,450 units preordered; almost what Uncanny X-Men had. Capital's share of DC's overall sales was especially small when it came to titles with wide newsstand distribution and subscription sales: Superman #409 at 93rd place with 4,600 copies preordered is not a misprint; it's only about 4% of the title's overall sales. That would increase dramatically as the newsstand continued to shrink and as DC's discounts through Capital improved. 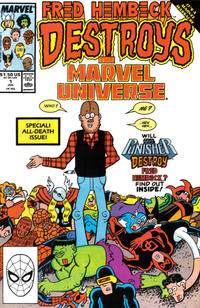 As the chart below reports preorders, some of the comics ranked did not come out on schedule. Fred Hembeck Destroys the Marvel Universe #1 had been slated for 1983; orders were taken this month, only to be delayed again for four years. (Hembeck writes about the tumultous path that issue took to the stands here.) When the issue finally released in 1989, its sales through Capital would be 26,500 copies, more than 10,000 copies more than in 1985; that's a reflection of growth in the market as well as Capital's increasing share of the business.

The raw version of the chart below was published in the March 1985 Internal Correspondence; most all of the sales figures added are the actual preorders, as provided by Capital to this writer upon the company's closure in 1996. The few remaining figures were derived by using the known sales to compute the month's order index number.

The dates are the ones Capital said each item was shipping, first according to its March 1995 CCD Orderpak catalog and incorporating all updates from its New Weekly Releases newsletters from March and April. The dates cited are Tuesdays, although Thursday at 12:01 a.m. is when World Color Press in Sparta, Ill. released its comics to distributors. (Milton Griepp of Capital said by the end of the day on Thursday, more than half its customers had usually received their comics.)

Further, in this era, distributor catalog dates for all publishers did not synch up exactly with the calendar month, so Capital's June charts include a week's worth of DC comics from April — and are missing the first week's comics, which appeared in Capital's February charts. This would continue until March 1995, when DC would realign its solicitations with the Direct Market's calendar month (that chart only included three weeks of DC sales as a result). It wasn't uncommon for smaller presses to have little control over their shipping dates; quite a lot of books in the March chart shipped in April.

Capital did not run market shares in this era; we calculated them by drawing upon the list below, but note that does not include all Capital sales (or even all known Capital sales). We'll add known sales of items that didn't make Capital's reported chart at a later date. We have also computed our own dollar sales rankings by multiplying units times cover price — but note that this method does not reflect what retailers actually paid after discount. It's provided as a rough approximation.

This list includes all items on Capital's chart, plus its actual preorder sales.
Dollar rankings were not provided by Capital in this era. The below are our projections based on unit sales times cover price, a method which misses some items and which doesn't reflect what retailers ultimately paid.
Distributor charts are regional commodity reports, not measures of a work's total reach. Read our FAQ.
The links lead to current listings for each issue on eBay. You can also find the books at your comics shop.

Capital did not publish graphic novel charts in this era, and while it did include better-selling graphic novels in its overall unit sales rankings, none made the list during this month.

The month in comics shops 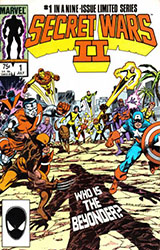 (All figures below are estimated)

These figures are for Capital City Distribution. Industrywide totals would be higher.