While DC's flagship character, Superman first appeared in Action Comics #1 in 1938, the more recognizable home for Superman is his eponymous title, started in the summer of 1939. 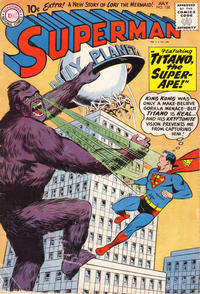 Superman's sales in the very earliest days are likely in the 200,000 copy range, given the known Audit Bureau information (in January of 1939, Action, Adventure, Detective, and More Fun collectively sold 710,000 copies). That figure almost certainly rose very quickly, with sales over 1 million copies in the 1950s; some advertisements in the period touted astronomical numbers which have yet to be verified.

In the 1960s, when sales data began appearing in the title, sales were below a million copies but still stellar relative to the rest of the market; Superman was the #1 title in 1962, 1965, and 1968. (Figures are not available for 1963 and 1964, but Superman likely topped the market in those years, too.)

A long decline began in 1965, only really being reversed when the entire Superman franchise was rebooted. Superman became Adventures of Superman and sales increased dramatically; a new Superman title, starting over with #1, sold even more. It was that title that posted colossal, million-copy topping sales again in 1993 when Superman "died" in its 75th issue; Adventures, part of the same storyline, shared in the success. The 500th issue of Adventures, when Superman began his return from the dead, had orders of more than 700,000 copies at Capital City Distribution and likely more than 2 million copies overall.

Adventures continued through the 1990s as part of a weekly cycle with the other Superman titles; cover numbers in triangles told readers which series to read in what order. In 2006, DC restored the original title to the series, giving Superman its numeric legacy back with issue #650. That run ended with #714 and the DC relaunch in 2011, and the series was rebooted yet again in 2016.

Some direct-market only information is available in the monthly reports.

Statements of Ownership appeared for many years in the title before DC (or, rather, National Periodical Publications) was required to publish sales figures beginning in 1960. As with other DC titles, DC did not print sales figures in its Statements in 1963 and 1964. Errors also appeared in 1979 and 1980, as the print runs published do not equal the number of copies broken out in the narrower categories.

In 1986, DC changed the name of Superman to Adventures of Superman; the subscriptions went with the renamed title. No subscription numbers appeared in the new Superman title (Vol. 2) that began in 1986.